Blog
You are here: Home1 / Blog2 / Bitcoin3 / What is an ICO: A Detailed Explanation of Crypto Investments

An initial coin offering (ICO) is a form of crowdfunding that only uses cryptocurrency. They are used to give capital to growing startups. ICOs are created when a startup pre-allocates their own cryptocurrency (referred to as tokens) to investors. Investors can buy for the tokens with popular cryptocurrencies such as Bitcoin and Ethereum.

You’ve probably heard the term before, but there are some ICOs within the few years that have gained popularity and have been used by investors worldwide. Ethereum is a prime example a popular ICO that’s been created. Back in 2014, it raised up to $18 million in BTC, which is about 40 cents per ether. After a growth spike, Ethereum now has a market capitalization of $63 billion and traded at a price of $660 per coin. One ICO gained $150 million in funding within three hours, and over $1.3 billion raised overall in this year alone. ICO sales have doubled from about 1.5 sales a week in 2016 to over 2.75 in 2017.

The first cryptocurrency that has been funded via an ICO was Ripple. In 2013, a company called Ripple labs developed the Ripple Payment System and made about 100 billion XRP tokens. Afterwards, the company sold the tokens to aid in developing Ripple’s platform.

There have been several extra cryptocurrencies that were funded by ICOs. For instance, Mastercoin was made with the purpose of tokenizing Bitcoin and to execute smart contracts.

Recently, there are over 400 ICOs within the cryptocurrency market. This image shows the amount of percentage of categories that ICOs are invested in. Due to its flexibility, ICOs can be used for almost anything! 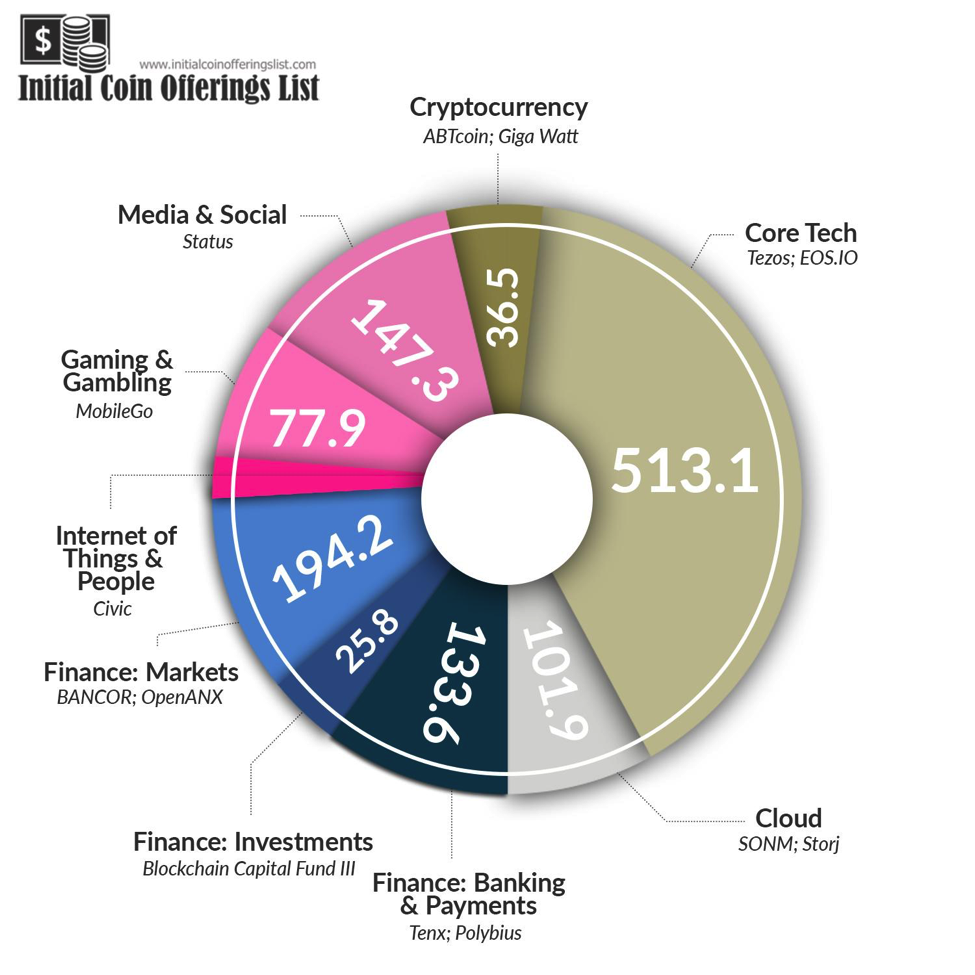 Many analysts believe that ICOs are perfect for those wanting to receive long-term profits. Here are some advantages that make ICOs a worthwhile investment.

As long as the cryptocurrency exchange remains functional, tokens are more liquid than traditional stock trading options. Crypto markets are transparent. This means that you can see the asset price of your ICO token in real time.

With stock options, you can only trade during the weekdays. But what if the value of your stock decreases highly during the weekend? This can be dangerous if you leave your account on for too long, and you’ll be unable to sell the stock when it reaches too low.

With ICOs, you can sell and trade them for different tokens at any time! While cryptocurrencies is a volatile market, it allows you to exit and close positions whenever you need it. Because of this reason alone, ICOs have more liquidity than fiat currencies, forex trading, ETFs, stocks, and commodities.

One of ICO’s main advantages is that each of the tokens can be bought at a low price. Most cryptocurrency exchanges begin to sell these new ICO tokens for profit once their project starts showing signs of completion.

For example, Ethereum tokens have increased in value in a large magnitude. Analysts have noticed its growth from 3 to a $698 within 3 years. When you invest in ICOs, you have the chance of making a large profit if your coin starts to increase in value dramatically.

Still, some skeptics are still apprehensive about the future developments of ICOs as a market and as a trading option. Here are some disadvantages that you should look into before you begin trading.

When you invest in ICOs, you’re taking a risk. Most of these projects aren’t fully completed, yet investors buy ICO tokens to increase the chance of the project becoming successful. ‘’

On most occasions, ICOs have a whitepaper or some code to show what the project will look like once it is finished. But, there isn’t a guarantee that the project will ever reach its final stage or have the mainstream appeal to be used by millions of new people.

You’ll have to understand that there is some risk associated with ICOs. It can take years until there is an actual market for the token you placed your investment on. Remember, invest with risk and only on the ICOs that you believe are great for long-term growth.

Backers only have a financial stake in the ICOs they invest their capital in. However, they are unregulated and unregistered within the cryptocurrency exchange market. This means that you won’t be reimbursed if the project fails or is discontinued.

This is a small issue that most investors tend to overlook. Fortunately, it’s becoming less of an issue because smart contracts can be used to lock ICO funds to increase the legitimacy of each project.

How to Buy an ICO Token?

First, you have to conduct proper research before buying any ICO token. Look at it and ask yourself the following questions

Once you find the answer to these questions, start investing in the ICO that appeals to you the most. Following these steps will ensure that you’ve made a safe investment and will help you determine the good ICOs from the ones that show no signs of growth.

Overall, ICOs are good for long-term traders who have faith that the cryptocurrency market will grow. While not all ICOs are made equal, you can gain a lot by dedicating time, research and a bit of income in it. To conclude keep applying your investment strategies and skills to make sure that you gain the most returns from ICOs by becoming a well informed and careful investor! For research purposes keep an eye on 101trading.co.uk. We are going to publisch alot of content about ICO this coming year.

How to minimize risks and maximize profits with Plus500

Litecoin’s Development: How Did it Perform This December?
Scroll to top
We use cookies to ensure that we give you the best experience on our website. If you continue to use this site we will assume that you are happy with it.Ok